Raw organic nuts make for a near-ideal snack given their healthy fat, vitamin, antioxidant, and fiber content. If you’ve avoided them out of concern for your weight, you may want to reconsider.

A growing number of studies refute the myth that nuts might cause weight gain. In fact, the converse is true, as research1 shows weight loss is one of the health benefits of regular nut consumption.

Those who eat nuts on a regular basis also tend to have lower systolic blood pressure and are less likely to have risk factors for metabolic syndrome, such as low HDL cholesterol, abdominal obesity, and high fasting glucose.2

It’s not surprising then that nut consumption has been linked to cardiovascular health and a lower risk for diabetes. A number of studies have also linked nuts to a reduced mortality risk and life extension.

One reason nuts are so beneficial is that many—including walnuts, hazelnuts, pecans, Brazil nuts, and almonds—contain the amino acid l-arginine, which offers multiple vascular benefits to people with heart disease, or those who have increased risk for heart disease due to multiple cardiac risk factors.

One large-scale, 30-year long Harvard study 3,4,5,6 found that people who ate a small handful (approximately one ounce or 28 grams) of nuts seven times per week or more were 20 percent less likely to die for any reason, compared to those who avoided nuts.

“Even those who ate nuts less than once a week had a seven percent reduction in risk. Consuming nuts at least five times a week corresponded to a 29 percent drop in mortality risk for heart disease, a 24 percent decline for respiratory disease and an 11 percent drop for cancer.”

Another study8 published in the Annals of Internal Medicine found that middle-aged women who followed a Mediterranean-style diet rich in nuts and vegetables were approximately 40 percent more likely to survive into later decades without developing some form of chronic disease—including age-related memory deterioration.

Most recently, researchers at Maastricht University investigated the link between specific nuts and diseases, and found that those who ate at least 10 grams (0.3 ounces) of nuts or peanuts a day had an average 23 percent reduced risk of death due to cancer, diabetes, respiratory- and neurodegenerative diseases during the decade-long study.9,10,11

According to lead author, Professor Piet van den Brandt: “It was remarkable that substantially lower mortality was already observed at consumption levels of 15g of nuts or peanuts on average per day.”

It’s worth noting though that peanuts are “nuts” in name only. It’s actually a legume, and as a general rule I don’t recommend them as they tend to be very heavily sprayed with pesticides and frequently contaminated with aflatoxin. Peanut allergy is also among one of the most common food allergies out there.

In terms of nutrition, peanuts also have the drawback of being relatively high in omega-6, so they may further skew your omega 3 to omega 6 ratio—a problem you may struggle with if you’re eating processed foods and not enough omega-3 fats.

Most nuts’ nutritional makeup closely resemble what I consider to be an ideal ratio of the basic building blocks—fat making up the greatest amount of your daily calories, followed by a moderate amount of high quality protein and a low amount of non-vegetable carbs (see my Food Pyramid for Optimal Health). 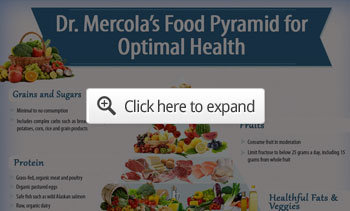 That said, some have more ideal ratios than others. My favorite nuts are macadamia and pecans, as they provide the highest amount of healthy fat while being on the lower end in terms of carbs and protein.

Just one serving of macadamia nuts net 58 percent of what you need in manganese and 23 percent of the recommended daily value of thiamin. Moreover, about 60 percent of the fatty acid in macadamia is the monounsaturated fat oleic acid. This is about the level found in olives, which are well known for their health benefits.

Walnuts are also known for their health-boosting properties, which includes anti-cancer activity (slashing breast cancer risk in mice by 50 percent, and reducing prostate cancer growth by 30-40 percent), and improved reproductive health in men, just to mention a couple.

Just one-quarter cup of walnuts also provides more than 100 percent of the daily recommended value of plant-based omega-3 fats, along with high amounts of copper, manganese, molybdenum, and biotin.

Even pistachios, while having a more “lopsided” fat/protein/carb ratio, landing them toward the bottom of my list of healthy nuts, still have documented health benefits, particularly for diabetics. Compared to other nuts, pistachios are high in lutein, beta-carotene, and gamma-tocopherol (vitamin E), and eating one or two servings of pistachios a day has been shown to lower oxidized LDL cholesterol in people with elevated levels.12

For comparison, the following list shows the fat, protein, and carbohydrate content13 in grams per one ounce for your most common tree nuts:

For the greatest health boost, look for nuts that are organic and raw, not irradiated or pasteurized. When it comes to almonds, be aware that even those labeled “raw” are typically pasteurized when sold in the US. The reason for this goes back to a couple of salmonella outbreaks in 2001 and 2004 that were traced back to raw almonds. As a result, as of September 1, 2007 virtually all almonds must be pasteurized before being sold. If you want truly raw almonds that have not undergone some form of pasteurization (oil- or dry roasting, blanching, steam processing or propylene oxide (PPO) treatment), you’ll need to seek out vendors selling in small quantities who have a waiver from the pasteurization requirement.

Another point to remember when it comes to almonds: As with walnuts, one of the healthiest aspects of this nut appears to be their skin, which is rich in antioxidants (including phenols, flavonoids, and phenolic acids) typically associated with vegetables and fruits. A study14 in the Journal of Agricultural and Food Chemistry even revealed that a one-ounce serving of almonds has a similar amount of total polyphenols as a cup of steamed broccoli or green tea.

Hence to get the greatest benefit, opt for almonds that have their skin on rather than blanched (de-skinned) almonds. When consumed with these guidelines in mind, raw, organic nuts are a convenient and enjoyable superfood to add to your diet, which is precisely why they’re recommended as one of the sources of healthy fats in my nutrition plan, along with avocados, raw dairy, and butter made from raw grass-fed organic milk, organic pastured egg yolks, coconuts and coconut oil, and grass-fed meats.

More from my site