Your body is a complex ecosystem made up of more than 100 trillion bacteria, fungi, viruses, and protozoa, collectively referred to as your microbiome, which must be properly balanced and cared for if you want to maintain good health.

These microbes are so numerous they actually outnumber the cells in your body 10 to one. With such a high prevalence of microbes in your system, it seems reasonable to suspect that they’re of some major importance.

And indeed, recent years have brought a scientific flurry of information demonstrating just how crucial your microbiome is to everything from genetic expression, immune function, body weight and composition, to mental health, memory, and the prevention of numerous diseases, from diabetes to cancer.

For example, in one study,1 DNA analysis of diseased sections of intestine removed from patients suffering from Crohn’s disease revealed that one particular bacterium, Faecalibacterium prausnitzii, was lower than normal.

While researchers have linked the overabundance of specific bacteria to various diseases, this finding suggests certain anti-inflammatory microbes may be actively involved in preventing certain disease states and when they’re lacking, you end up losing this protection.

Recent research also suggests that genes from microbes have become incorporated into human DNA, including some genes that help your immune system defend itself against infections.

The composition of the human microbiome varies from person to person based on factors such as diet, health history, geographic location, and even ancestry, and it’s readily influenced by diet, chemical exposures, hygiene, and other environmental factors.

In fact, it’s become increasingly clear that destroying your gut flora with antibiotics and pharmaceutical drugs, harsh environmental chemicals, and toxic foods is a primary factor in rising disease rates.

The reason for this is because your gut is actually the proverbial gatekeeper for your inflammatory response, and inflammation tends to be a hallmark of most chronic diseases.

The inflammatory response starts in your gut and then travels to your brain, which subsequently sends signals to the rest of your body in a complex feedback loop. It isn’t important that you understand all of the physiology here, but the take-away message is that your gut flora’s influence is far from local. It significantly affects and controls the health of your entire body.

Microbial Genes Are Passed from Parent to Child

It’s important to realize that the foundation of a person’sgut flora is laid from birth. Just like other genetic information, microbes (and their genetic material) are passed on from parent to child.

A baby basically “inherits” the microbiome from its mother as it passes through the birth canal (provided it’s a vaginal birth). This is why it’s so important to address your gut health before, during, and after pregnancy.

Microbes are also passed between mother and child via breast milk and close body contact in general. As noted in a recent article by Scientific American,2 all of these transfers are crucial for the child’s health, but can easily be circumvented by medical interventions and modern “conveniences”:

“Because the critical issue is the intergenerational transfer of microbes and its timed assembly, three periods are relevant: before pregnancy, during pregnancy and in the child’s early life.

For all three periods, antibiotic use is relevant because it may directly change maternal microbes prior to transfer or the child’s microbes afterward.

Infant formulas have not been constructed with the benefit of millions of years of mammalian evolution, because breast milk contains nutrients that specifically select for the growth of preferred coevolved organisms and inhibit opportunists and pathogens.”

Unfriendly (or lacking) flora can predispose babies to Gut and Psychology Syndrome (GAPS), which can raise the child’s risk of any number of health problems, including autism and autoimmune disorders.

Babies who develop abnormal gut flora are left with compromised immune systems, which may turn out to be a crucial factor when it comes to vaccine-induced damage.

As explained by Dr. Campbell-McBride, vaccinations were originally developed for children with healthy immune systems, and children with abnormal gut flora and therefore compromised immunity are not suitable candidates for our current vaccine schedule as they’re more prone to being harmed. To learn more about this, please see this previous article.

Some of the latest research3 in this arena reveals that bacteria, fungi, and viruses may be part of the “missing link” in the progress of humans. As noted in a report by CNN:4

“Though most of our genes come from primate ancestors, many of them slipped into our DNA from microbes living in our bodies, says British researcher Alastair Crisp. It’s called horizontal gene transfer…

Bacteria slip genes to each other, and it helps them evolve. And scientists have seen insects pick up bacterial genes that allow them to digest certain foods… Humans may have as many as hundreds of so-called foreign genes they picked up from microbes.”

The human genome consists of about 23,000 genes, whereas the combined genetic material of your microbiome is somewhere between 2-20 million. According to the researchers, these extra genes may have played a role in helping to diversify our own DNA.

In this study,5 researchers at the University of Cambridge identified 128 “foreign” genes in the human genome, including the gene that determines your blood type (A, B, or O). This gene, and others—including some that help your immune system defend itself against infections—appear to have been transferred into the human gene pool from microbes.

Microbes That Ferment Fiber Are Important for Health

One of the quickest and easiest ways to improve your gut health is via your diet, as the microbes in your body consume the same foods you do. The beneficial ones tend to feed on foods that are known to benefit health, and vice versa. Sugar, for example, is a preferred food source for fungi that produce yeast infections and sinusitis, whereas healthy probiotic-rich foods like fermented vegetables boost populations of health-promoting bacteria, thereby disallowing potentially pathogenic colonies from taking over.

Fiber is also important for a healthy microbiome. Some of the microbes in your gut specialize in fermenting soluble fiber found in legumes, fruits, and vegetables, and the byproducts of this fermenting activity help nourish the cells lining your colon. Some of these fermentation byproducts also help calibrate your immune system, thereby preventing inflammatory disorders such as asthma and Crohn’s disease.6,7 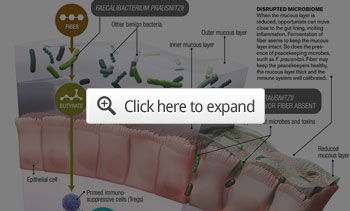 Your intestine harbors over 500 different species of microbes, and research suggests virtually all of these have the ability to affect your health in one way or another, although we still do not fully understand all the mechanisms and pathways by which they do so. It is a quickly evolving field however, and we’re learning more with each passing year. For example, research published a couple of years ago show that common bacterial metabolites—short-chain fatty acids (SCFAs)—selectively expand regulatory T cells called Tregs, which are critical for regulating intestinal inflammation.9

According to one of these studies:10 “Treg cells suppress the responses of other immune cells, including those that promote inflammation. This finding provides a new link between bacterial products and a major anti-inflammatory pathway in the gut.” Other research11,12 has linked Tregs—which are fed by dietary fiber—to the prevention and reversal of metabolic syndrome, in part by stimulating oxidative metabolism in your liver and adipose tissue.

Are You Getting Enough High-Quality Fiber?

Dietary guidelines call for 20-30 grams of fiber per day. I believe an ideal amount for most adults is around 32 grams daily. Most people, however, get only half that, or less. Many whole foods, especially fruits and vegetables, naturally contain bothsoluble and insoluble fiber. This is ideal, as both help feed the microorganisms living in your gut. The same cannot be said for grains (including whole grains) and processed foods, as the carbohydrates found in both can serve as fodder for microorganisms that tend to be detrimental rather than beneficial to your health.

Gliadin and lectins in grains may also increase intestinal permeability or leaky gut syndrome. So, to maximize your health benefits, focus on eating more vegetables, nuts, and seeds. The following is a small sampling of foods that contain high levels of soluble and insoluble fiber.

A simple tip to increase the amount of fiber and biodense nutrients in your diet would be to add sunflower sprouts to your meal. They work great in salads but can also be added to virtually any dish to radically improve its nutrition. Organic whole husk psyllium is another effective option. Taking it three times a day could add as much as 18 grams of dietary fiber (soluble and insoluble) to your diet. Opting for an organic version of psyllium will prevent exposure to pesticides, herbicides, and chemical fertilizers, as conventional psyllium is a very heavily sprayed crop. I also recommend choosing one that does not contain additives or sweeteners, as these tend to have a detrimental effect on your microbiome.

Optimizing your gut flora may be one of the most important things you can do for your health, and the good news is that this isn’t very difficult. However, you do need to take proactive steps. To optimize your microbiome both inside and out, consider the following recommendations: