Imaging Technology Finally Reveals How Emotions Manifest in Your Body

I’ve often said that you cannot divorce your health from your emotions. Every feeling you have affects some part of your body, and stress can wreak havoc on your physical health—especially if you’re not exercising or eating right, as both of these can help keep stress in check in the first place.

Still, even if you’re doing everything “right,” your emotions—both chronic and acute—can wield great power over your body.

The classic definition of stress is “any real or imagined threat, and your body’s response to it.” Your body’s natural stress response can have a significant impact on your immune function, brain chemistry, blood sugar levels, hormonal balance, and much more.

In recent years, there’s been an upwelling of mind-body therapies that take this interrelatedness between your emotions and physical health into account.1 The Emotional Freedom Technique (EFT) is, I believe, among the most effective.

Many in the primarily left-brained field of science are still reluctant to embrace the mind-body paradigm however, and one of the factors holding them back is the fact that you cannot see or measure emotions inside your body. But just because we don’t have the technology to visualize the mind-body connection doesn’t mean it’s not real!

Mapping How Emotions Manifest in Your Body

The image below is a step in the direction of being able to visualize how your emotions manifest inside your body. Researchers in Finland asked 700 volunteers from Finland, Sweden, and Taiwan to think about one of 14 predetermined emotions, and then paint the areas of a blank silhouette that felt stimulated by that particular emotion.

Using a second blank silhouette, they were asked to paint in the areas that felt “deactivated” during that emotion. To help them generate the appropriate emotion, they could read a short story or view a video. (If you want to try this experiment yourself, you can do so here. The online test is also available in Russian, French, and Italian.)

The experiment shows that emotions do tend to be felt in your body in ways that are generally consistent from one person to the next, irrespective of your age, sex, or nationality. As reported by the featured article in The Atlantic:2

“The mapping exercise produced what you might expect: an angry hot-head… a depressed figurine that was literally blue (meaning they felt little sensation in their limbs).

Almost all of the emotions generated changes in the head area, suggesting smiling, frowning, or skin temperature changes, while feelings like joy and anger saw upticks in the limbs—perhaps because you’re ready to hug, or punch, your interlocutor. Meanwhile, ‘sensations in the digestive system and around the throat region were mainly found in disgust,’ the authors wrote.

It’s worth noting that the bodily sensations weren’t blood flow, heat, or anything else that could be measured objectively—they were based solely on physical twinges subjects said they experienced…

[T]he results likely reveal subjective perceptions about the impact of our mental states on the body, a combination of muscle and visceral reactions and nervous system responses that we can’t easily differentiate.” 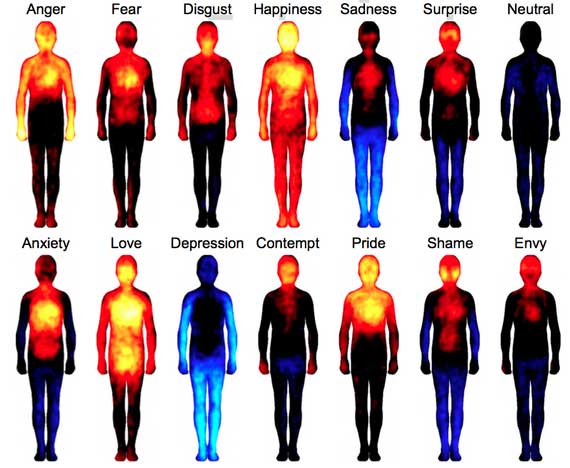 It’s interesting to note that certain emotions are known to be associated with pain in certain regions of your body, even though science cannot give an explanation for why. For example, those suffering from depression will often experience chest pains, even when there’s nothing physically wrong with their heart.

Extreme grief (or any other extremely stressful event) can also have a devastating impact—not for nothing is the saying that someone “died from a broken heart.” In the days after losing a loved one, your risk of suffering a heart attack shoots up by 21 times!

While the mechanics of these mind-body links are still being unraveled, what is known is that your brain, and consequently, your thoughts and emotions, do play a role in your experience of physical pain, and can play a significant role in the development of chronic disease.

For example, previous studies have linked stress to lowered immune system function, increased blood pressure and cholesterol levels, and altered brain chemistry, blood sugar levels, and hormonal balance. It has also been found to increase the rate at which tumors grow.4 One of the reasons for this has to do with the way the biological stress response promotes inflammation in your body.

When you’re stressed, your body releases stress hormones like cortisol, which prepare your body to fight or flee the stressful event. Your heart rate increases, your lungs take in more oxygen, your blood flow increases, and parts of your immune system become temporarily suppressed, which reduces your inflammatory response to pathogens and other foreign invaders.

When stress becomes chronic, your immune system becomes increasingly desensitized to cortisol, and since inflammation is partly regulated by this hormone, this decreased sensitivity heightens the inflammatory response and allows inflammation to run rampant. While it’s not possible to eliminate stress entirely, you can help your body to compensate for the bioelectrical short-circuiting caused by emotional stress.

EFT Can Be Used to Counter Effects of Negative Emotions

I’m a big fan of energy psychology and one of the most popular forms is Emotional Freedom Technique (EFT), which is a type of psychological acupressure. While it makes use of the same energy meridians known in traditional acupuncture, EFT does not involve needles. Instead, gentle tapping with your fingertips is used to transfer kinetic energy onto specific meridians on your head and chest while you think about your specific problem — whether it is a traumatic event, an addiction, pain, anxiety, etc. — and voice positive affirmations.

This combination of tapping the energy meridians and voicing positive affirmation works to clear the “short-circuit”—the emotional block—from your body’s bioenergy system, thus restoring your mind and body’s balance, which is essential for optimal health and the healing of physical disease.

Clinical trials have shown that EFT is able to rapidly reduce the emotional impact of memories and incidents that trigger emotional distress. Once the distress is reduced or removed, your body can often rebalance itself, and accelerate healing. In the videos below, EFT practitioner Julie Schiffman shows how to tap for stress and anger.

Stress Takes a Heavy Toll on Your Gut

According to the authors in the featured study, “disgust” was the emotion that was most strongly felt in the gut. Fear, anxiety, and shame also generated a felt impact in this area. All four of these emotions are generally felt by those experiencing depression, and I’m not surprised to see a strong connection between these emotions and the gut.

In recent years, the connection between your gut health and your mood and behavior has become increasingly clear—so much so that some scientists are starting to consider probiotics (beneficial bacteria) as a potential alternative to antidepressant medications. For instance, the probiotic known as Bifidobacterium longum NCC3001 has been shown to normalize anxiety-like behavior in mice.5 Research published in 20116 also demonstrated that probiotics can have a direct effect on brain chemistry, thereby improving feelings of anxiety or depression. There’s also a wealth of evidence showing intestinal involvement in a variety of neurological diseases.

In a very real sense, you have two brains, one inside your skull and one in your gut, and the greatest concentration of serotonin, which is involved in mood control, depression, and suppressing aggression, is actually found within your intestines, not your brain. The implications are particularly significant in our current era of rampant depression and emotional “malaise.”

There’s compelling evidence suggesting that improving your gut health is a very important component, if not the key, to successfully addressing depression, anxiety, and other mood disorders. One of the easiest and most cost-effective ways to do this is to add traditionally fermented or cultured foods to your daily diet. To learn more about your gut-brain connection, and how probiotics may help you improve your mental health, please review my previous article, “Are Probiotics the New Prozac?”

Besides EFT and tending to your gut, there are many other stress-management strategies. The following are, I believe, among the most important basics:

Syncing Your Body and Mind

As stated in the beginning, just because we don’t yet have the technology to visually observe how the emotions affect the body doesn’t mean that the mind-body connection isn’t real. It is. You just have to observe the effects of your emotions to “see” how they might play a role in your health. After worrying about something for a period of time, do you then get a headache? Does the idea of going into a meeting set off a stomach ache?

Another way to familiarize yourself with the connection between your body and mind is to feel which parts of your body are stimulated or shut down when you’re experiencing any particular emotion, as was done in the featured study.

One thing is clear, your emotions matter, and they cannot be ignored in the big scheme of your overall health. So please, take your emotional health seriously. Sleep, exercise, eating properly, and addressing your stress are all part and parcel of a healthy lifestyle. If you’re struggling with difficult emotions, I really recommend giving EFT a try. There are also many other energy psychology tools out there that may offer similar benefits. The key is to find what works for you, and do it consistently to keep your equilibrium.